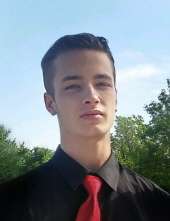 Devin was poisoned by fentanyl on 4/4/2020 after him and his friend were sold what they were told was a Percocet from someone they both knew advertising these pills on Snapchat. What he and his friend were told was a Percocet turned out to be pure fentanyl. There was zero Percocet in his system. The “friend” Devin was with knew Devin needed medical attention and instead of getting help he left our home, locking Devin alone in his room to die. Our family was dealt a heavy blow when the Dakota County Prosecuting Attorney’s office declined to press charges in Devin’s case. Devin was smart and energetic. He loved playing football and doing tricks on his bike. He was passionate about making music; he was gifted beyond words when it came to his lyrics. Devin had made plans to enroll in college courses geared towards music production and business prior to his passing. He had so many hopes and dreams that we’ll never see him achieve. Devin truly had a heart of gold. His shy boy smile melted many hearts. His laughter could erase the heaviest of sadness within seconds. He truly went out of his way to make sure those around him were happy even when he himself wasn’t happy. His sense of humor is sorely missed. Devin’s sense of humor couldn’t be matched; he was so quick witted and you never knew it until afterward that he just got you good. He was proud of his Lincoln MKZ that he saved up and bought on his own. Anything he put his mind to, he perfected. He was a great protector of his family, especially his little brother and older sister. He was often heard saying, “no one picks on my big sister or lil bro but me”. He was a hard working young man; he loved his job. He truly was a beautiful soul. “Everything is good. Everything is golden.”  We miss Devin more and more with each day that passes!! While we did not get justice for our son that will not stop us for advocating for other families who have lost their loved ones to this insidious drug that has been continuously ignored by everyone but us grieving families. We will continue advocating side by side with families like ours to bring awareness to fentanyl and law reform in hopes that even just one life can be saved.